In the blasted ruins of a forgotten temple a combat patrol of White Scars stalked through the shadows until their sensors picked up their foe in the distance, a patrol of Thousand Sons led by their sorcer overlords. 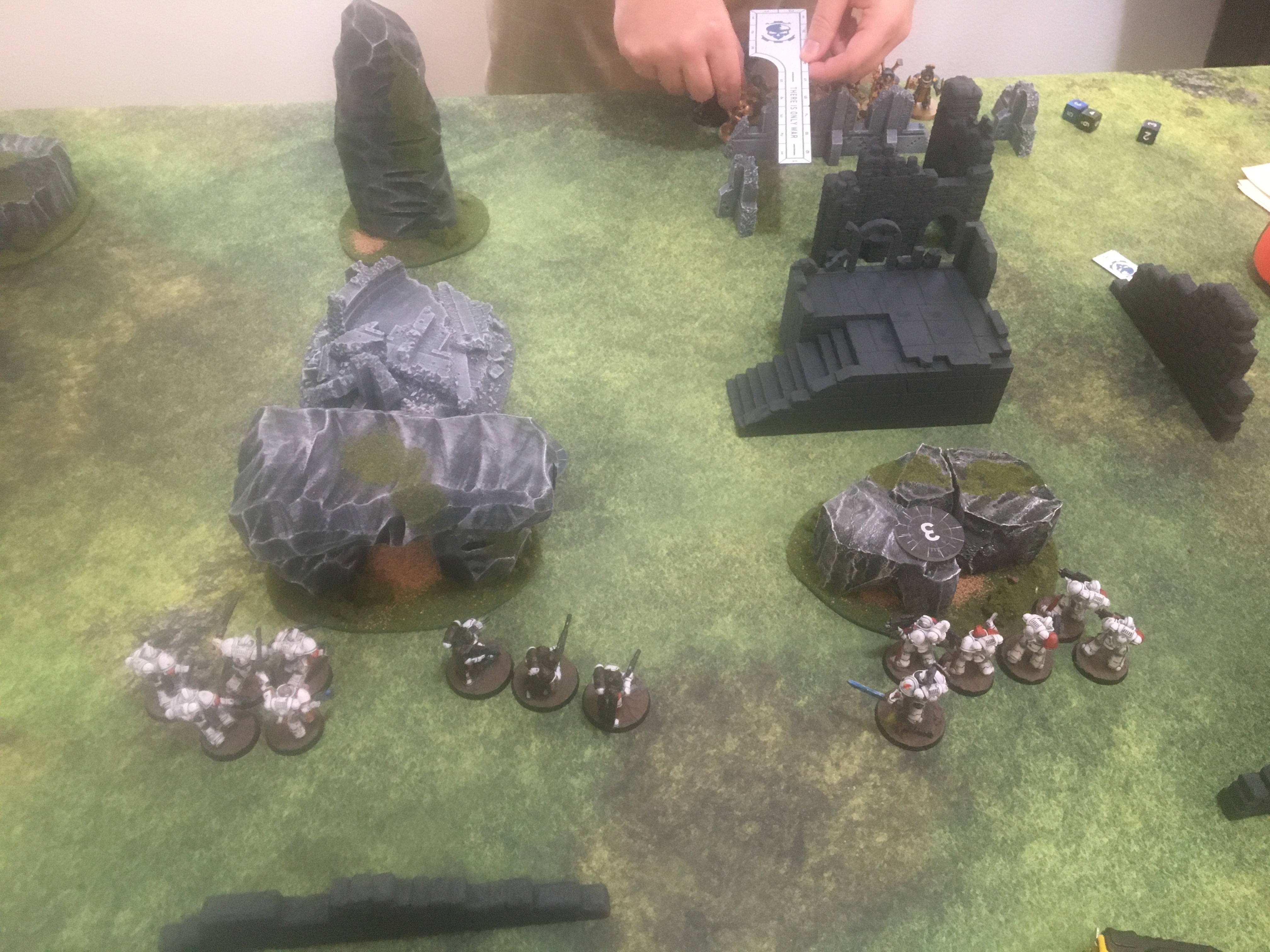 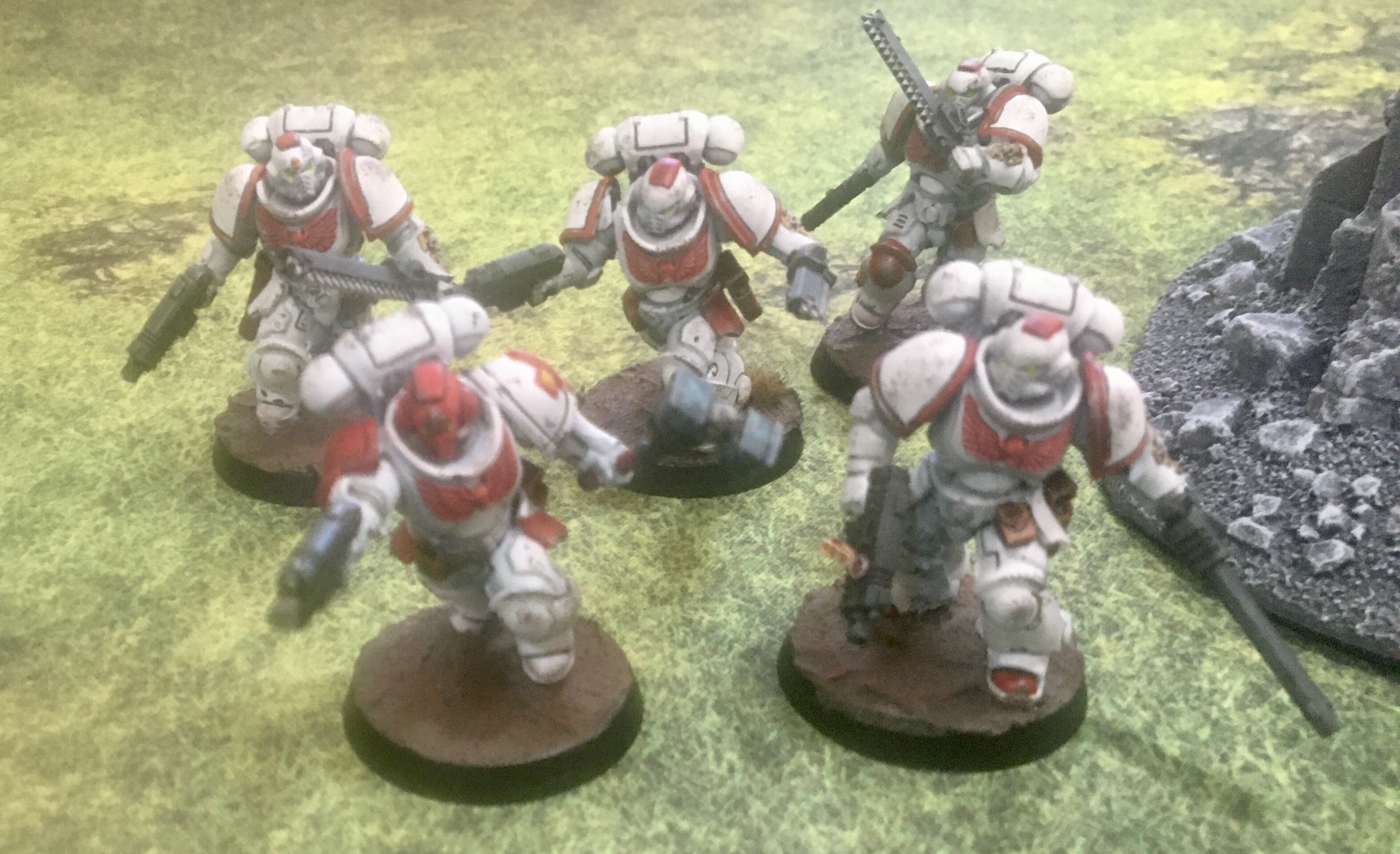 The battle was short and brutal. As the White Scars charged home Xanthos broke away to conduct a diabolical ritual, seeking lost knowledge amongst the ruins. Baleful witchfire flashed from the Thousand Sons, burning the marines as their warp-cursed bolters fired staccato bursts at the Scars. 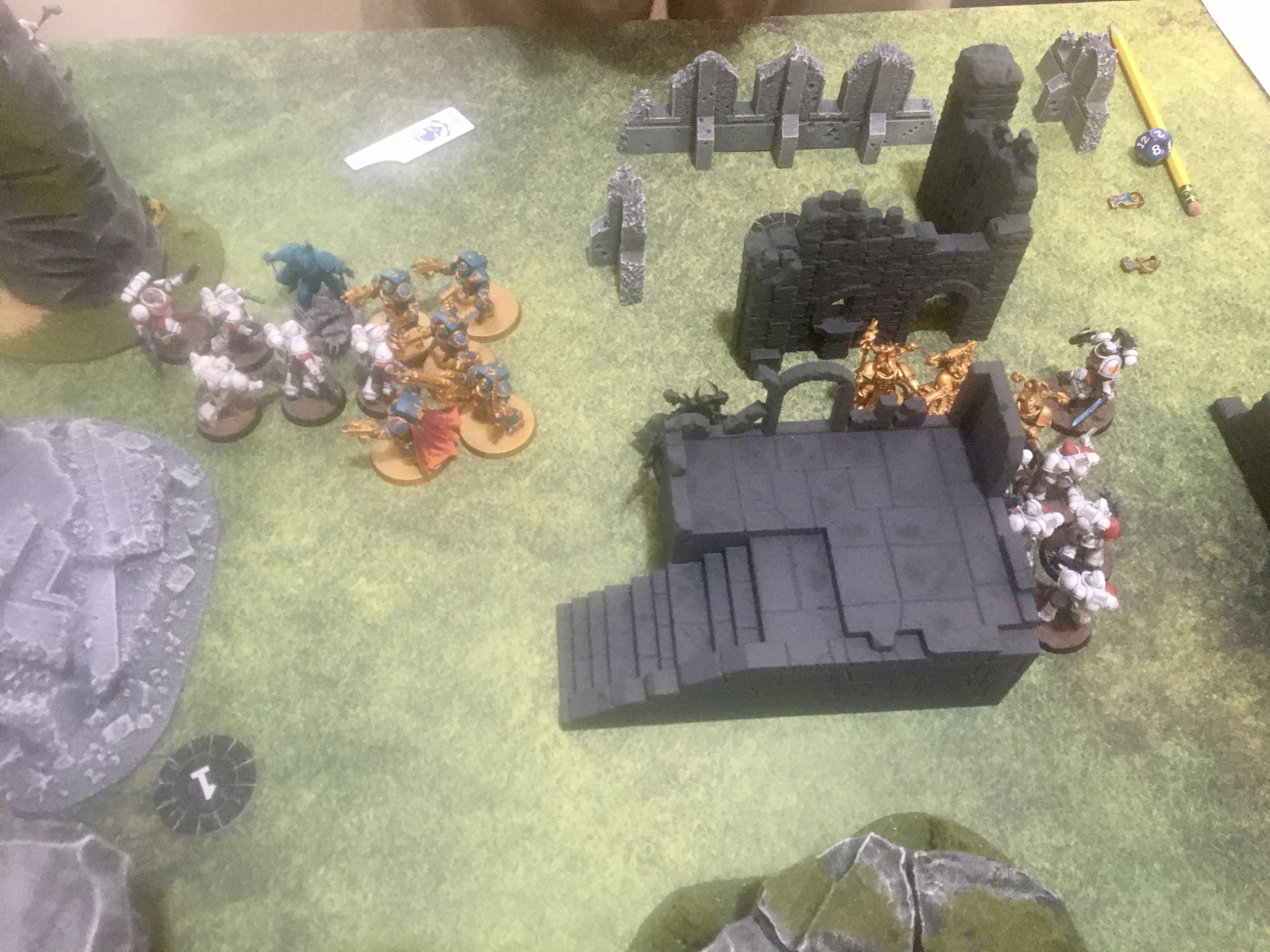 Both patrols crashed together, with Captain T’rak leading the way, his sword flashing from Rubricae to Rubricae., sending them back to the warp. 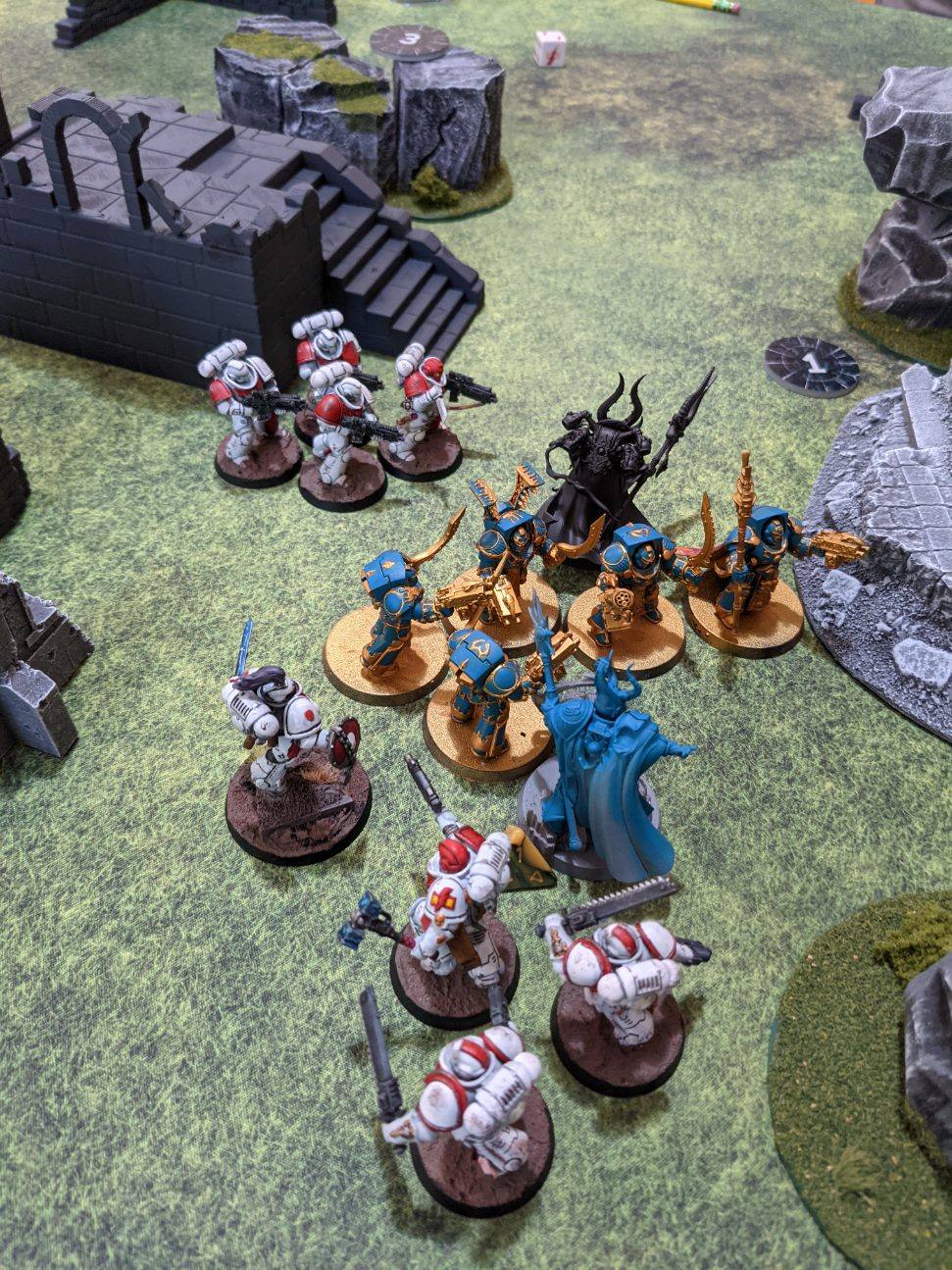 Slowly the Scars began to falter, the Scarab Terminators brushing them aside and weathering the furious attack, in the end the only unwounded Scar was Captain T’rak himself, who was standing over the body of Xanthos. 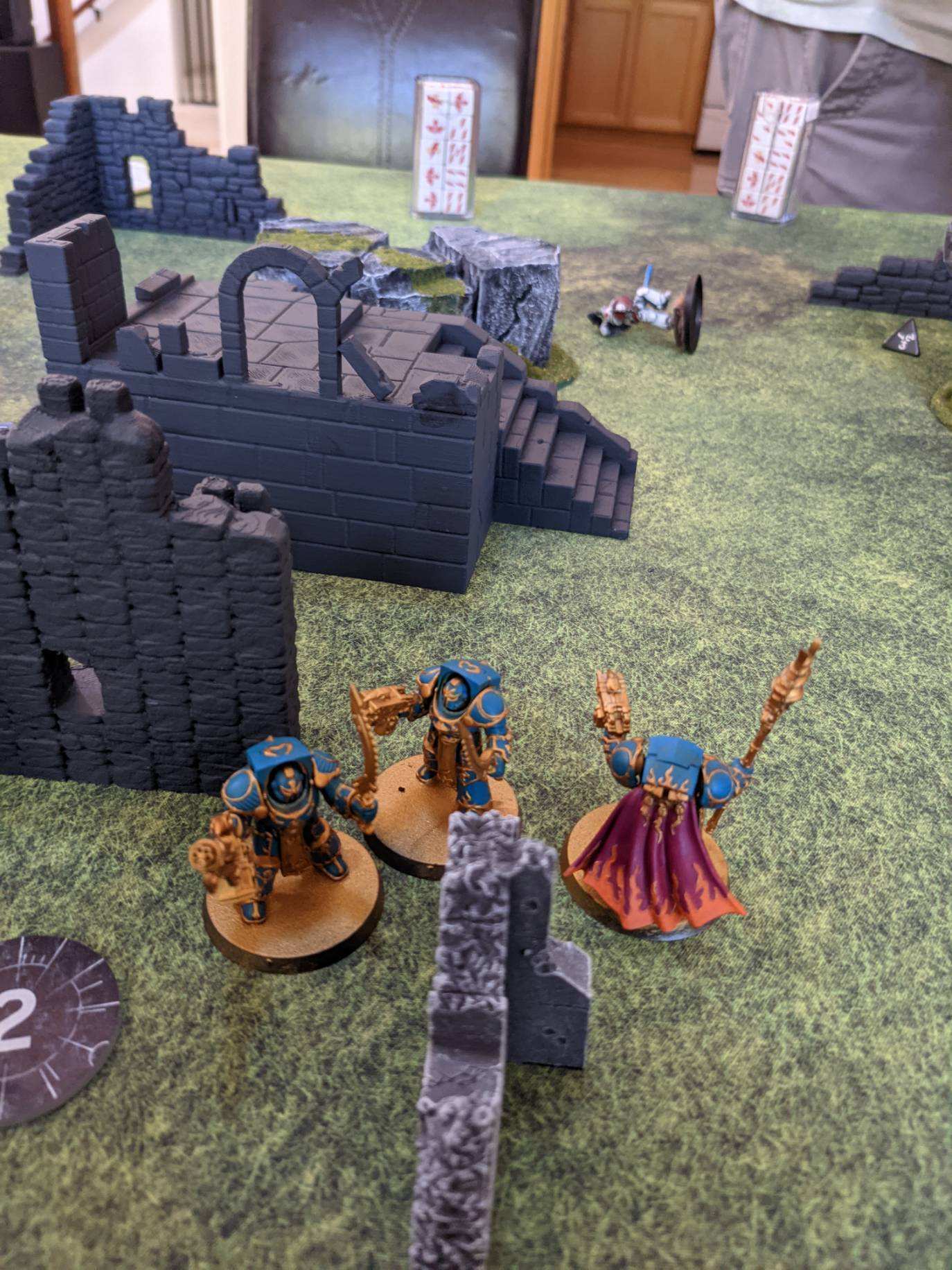 But a powerful burst of warp energy smote the Captain, leaving the field in the hands of the Thousand Sons. Fortunately for the Imperium, however, the Thousand Sons were unable to complete their ritual, and the battle was decided a draw.

Xanthoss: This is unacceptable. We should have forseen today’s attack by the Chogorian Horde

Zah’mat: I am sorry my lord. Our connection to empyrean has been tenuous in the sector

X: Yes, I am aware. That is why we needed to complete the ritual, but our efforts were stymied by our wayward cousins.

Z: Indeed, they fought with a speed and ferocity that I have never seen before. If not for the Scarab Occult, you and I might have been cut down

X: Be silent! No corpse-worshipper can defeat me, I am favored by Tzeentch!

Z: Of course, my lord, I meant no insult.

X: Be mindful of your words, infernal master! But you are right, the Scarab Occult fought well today and deserve praise. If only the rest of our forces fought as well. Nevertheless, we must press on in our investigation of this sector. Now, leave me to my plans!

Z: Yes, you are infinitely wise my lord. Surely, you will lead us to victory!